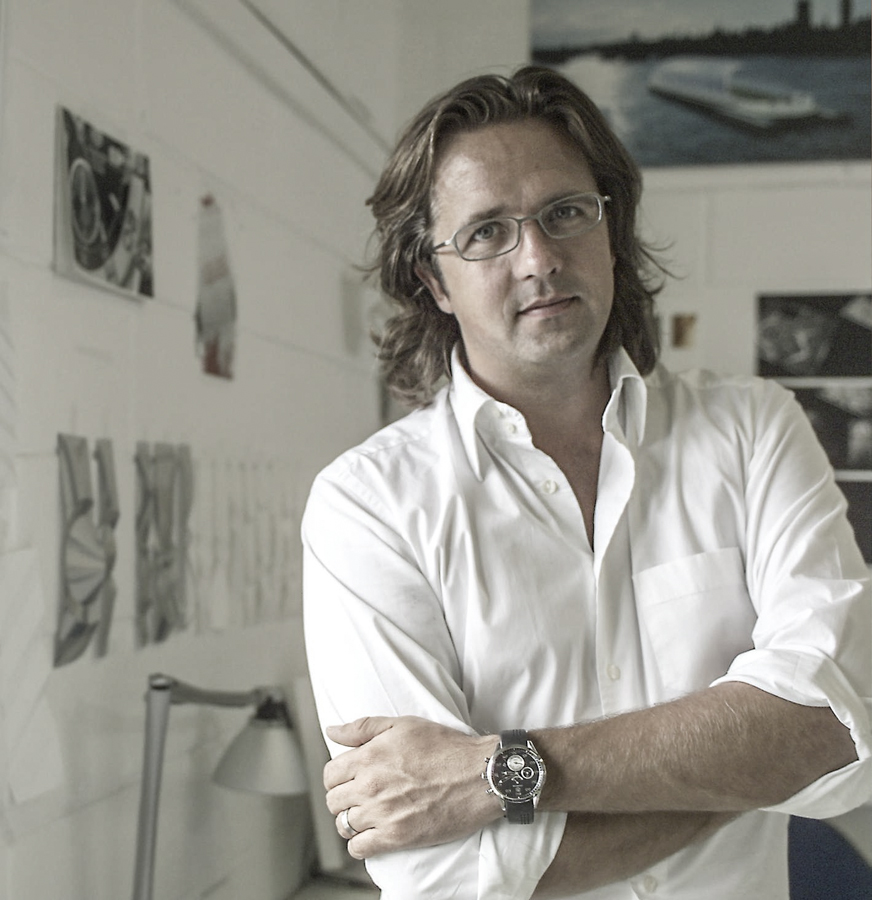 Any attempt at disseminating the eccentricities of Switzerland’s watchmakers, and watchmaking industry as a whole, is well served by realising just how insular their cottage industry is. Comprising tiny pockets of horological specialties dotted along the undulating Jura mountain range from Geneva eastwards – near-as-dammit totally isolated in the winter – it’s rare that outsiders get a look-in, let alone for the brands to look outwards. Which makes it all the more impressive that the mighty TAG Heuer, the luxury sportswatch brand with 150-plus years on the clock and numerous timekeeping innovations to its name, would deign to appoint a product designer based in trendy west London to design almost their entire output at a time of healthier-than-ever sales.

“I had never designed watches before, let alone trained as a watchmaker,” the 41-year-old Christoph Behling explains in his soft, precise pan-European accent. “I was born in Geneva but apart from some sort of birthright, that’s where it stops!” With a CV of ‘lifestyle products’ that stretched from Nokia handsets to airline seats, Behling’s small design studio was originally hired by TAG Heuer in 2003 to develop the LVMH-owned firm’s new eyewear collection – the start of a brand diversification that now includes high-end smartphones. “They somehow felt that maybe a different approach was required beyond their designers in Switzerland, and even existing eyewear designers – they needed an innovative angle to excite them.”

“It’s produced locally in a workshop where they recycle even their note paper; it’s powered by the movement of your arm or fingers; it is high-value but small and easily transportable; and it will never be thrown away – it will live as long as you do!”

Behling’s clever solution – glasses with conventional hinges replaced by tiny titanium bands coated by rubber arms – was the start of a profligate relationship. “Of course I always wanted to work on a watch – a watch is one of every designer’s dream products,” Behling continues. “But they didn’t allow me for a long time! And even when they did, the very first projects we worked on weren’t the main collection but the concept pieces.” The idea of unveiling an annual concept piece stemmed from Behling’s automotive past, having consulted for Peugeot, and fitted nicely with TAG Heuer’s motorsport connections.

The first concept piece, the V4 Monaco was inspired directly by car engines. “I don’t take ownership for the invention of V4. But at the beginning I pinned two visuals to our wall: one of a Ferrari engine from 1967, and then a Ferrari engine from 2003 – both beautiful, but in very different ways. By contrast, the watch’s engine hadn’t changed in 40 years. I asked TAG whether we could bring about a similar evolution.” A naïve question perhaps, but it often takes an outsider to challenge the accepted wisdom through sheer innocence. Thusly, TAG’s engineers were briefed, and they collaboratively came up with their own modern-day ‘engine’: a revolutionary V-shaped mechanical movement that employed 13 rubber belts to transmit its 4 barrels’ energy down the gear train. From then onwards, Behling’s five-strong Notting Hill agency grew into its responsibility as TAG Heuer’s ‘eyes’, designing everything (save for the odd ladies’ jewellery piece) from the latest thousandth-of-a-second Mikrotimer chronograph concept to the core ‘bread and butter’ lines such as Link, whose ultra-comfy Eighties bracelet gets a very slick reboot at the hands of Behling and co. this year. Throughout Behling’s seven-year tenure, TAG Heuer has since garnered more design accolades than any other Swiss watch brand, picking up iF Product Design Awards, Grand Prix d’Horlogerie de Genève Design Awards, a Fortune Design Award, a Wallpaper Design Award and several Red Dot Awards for the Monaco V4, Aquaracer 500M, Grand Carrera 36RS Caliper and Monaco 360 LS alone.

“We aren’t an external supplier,” explains Behling, “we are TAG’s in-house design team based in London – I’m out there every three weeks, they’re here every three weeks. We work very closely. “I do quite like that incestuous monoculture of Switzerland when you go into a bakery and someone can explain how a double tourbillon works,” Behling states with a wry smile. “But I think there is a danger you become too close-minded. In London, you suddenly see your product in the bigger context – where not everybody is a watch fan. Our office is on Portobello Road, right next door to Stella McCartney, I regularly go for dinner with friends who work on cars, furniture or fashion… London is pool for creativity.

“I think if you define yourself as a brand that looks towards the future – a brand that’s subtitled ‘avant-garde’ – you need to ask yourself if you’re really getting the best talent, new ideas, new materials, new technology within a closed environment like Swiss watchmaking… It was a very brave decision for TAG Heuer to take us on board, very unusual, but I think it is paying off.”

Keeping him on the straight and narrow as custodian of such an established brand identity, Behling reveals there are two voices in his head. One is Jack Heuer, whose continued involvement with the brand bearing his family name ensures that its original mission of constantly breaking new ground is upheld. As Behling notes, “With other historic brands that are still around, sometimes the past is glorified, put on a pedestal and history is repeated… [Jack] doesn’t want some sort of romantic celebration of his youth. He’s much more excited to be challenged.”

The other voice in Behling’s head is sustainability. Given his team’s other ongoing concern – the ‘SolarLab’ zero-emission boat project responsible for creating Hyde Park’s much-loved Serpentine ferry – not to mention his role as curator of the Royal College of Art’s ‘Sustain’ Award, this comes as no surprise. Indeed, a luxury watch could be the most ecological product on the planet right now, according to Behling: “It’s produced with hardly any resources,” he enthuses, “it’s produced locally in a workshop where they recycle even their note paper; it’s powered by the movement of your arm or fingers; it is high-value but small and easily transportable; and it will never be thrown away – it will live as long as you do!”

But it’s this last point that poses Behling’s biggest problem: creating objects that not only last a lifetime, but continue to appeal over the years.  “The only reason that someone will stop wearing a watch that’s this well-made is because they get bored of the design. It’s not because it stops working. As a designer, I can’t allow that; my dream scenario is that somebody forms this relationship that’s not just a passionate one-night stand – it’s a growing relationship, where you keep falling in love with your watch every time you notice a new detail. You need to create layers that people keep peeling away.” Which goes some way to explaining the painstaking process that Behling goes through with every watch that crosses his drawing board. Within such tiny confines, every one of many hundreds of design decisions have an instant knock-on effect. Just listening to how he arrived at the “sort-of strange cushion shape” for the Link’s new bezel causes the mind to boggle.

The recent return to simpler, cleaner, more classic watch styles means that this attention to detail is becoming even more important, and harder to get right with less on show. But Behling seems to relish the challenge: “I don’t want to sound distasteful because it is a difficult time for many people, but for watch design in particular, it’s a nice period right now. Prior to 2008, the industry was growing so fast, and as long as everything was bigger and black and had a bit of rose gold, it more or less sold and everyone said it was fantastic – it all turned a little bit vulgar.

“But with the downturn, we now have a situation where people are thinking a little bit more before they buy a watch. They are a much better-educated client, they are much more thoughtful, looking harder for those true values – which is very nice for a designer. I’m really enjoying it.”

Alex Doak is a London-based watch and luxury journalist and editor of HR Owen’s Drive magazine. Follow him on Twitter @AlexDoak