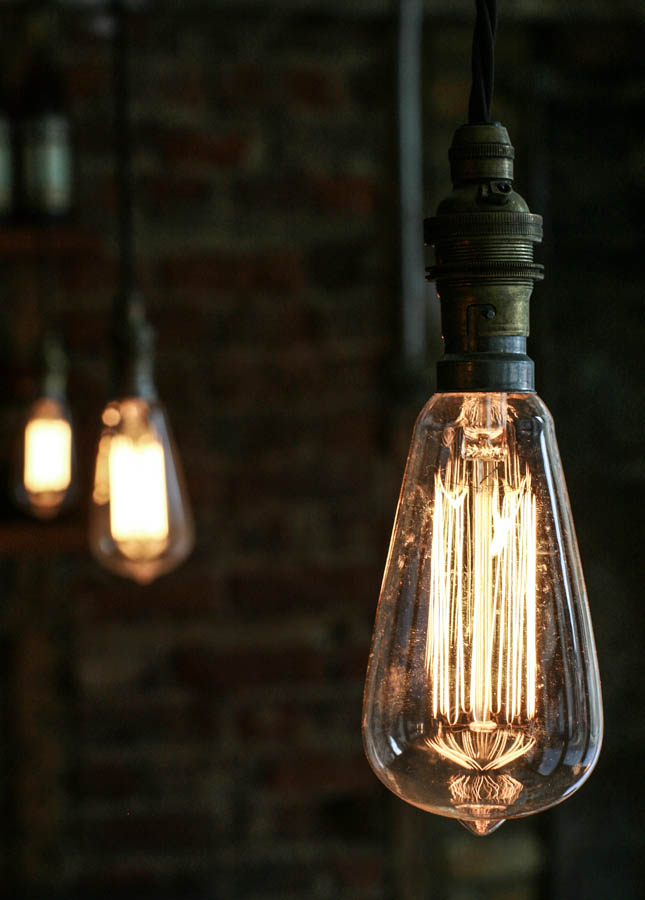 “The music should be slightly too loud and the lighting slightly too low,” says Russell Norman, revealing the USP of his restaurants. He removes his much loved, much-repaired Crombie – with a flash of electric crimson lining – and orders an Americano. It arrives, black and shiny, in a Duralex tumbler. Meanwhile, I sip a steaming, whisky-spiked hot toddy through a straw. We meet in the semi-private booth at the back of E. Mishkin, Norman’s “kind-of-Jewish deli with cocktails”. Its wooden doors, which open onto a chequered floor, have the patina of age: they once fronted a BBC radio booth. Dimmed fluorescent tubes, evocative of those illuminating the classic Formica cafés that were popular in the London of the 1950s, are attached to old floorboards that serve as wall panelling. “They are architectural tubes which might normally be used behind a bathroom mirror,” says Norman.

Increasingly profiled in articles on style, design and interior architecture, Norman has become famous for his fanatical approach to detail, expressed across his mini empire of five restaurants and bars in central London. “Little details please me,” he says. Norman invited me to discuss the old-fashioned filament light bulb, much in evidence in his schemes. He wrote: “I’m constantly amused and bemused by the massive increase in the use, and subsequent ubiquity, of the filament light bulb (they even use carbon filament squirrel cage bulbs in Nando’s now!)”

When American inventor, Thomas Alva Edison, designed the Squirrel Cage Teardrop filament bulb more than a century ago, he probably had little idea it would be used to bathe corporate Portugese flame-grilled peri-peri chicken under its smouldering, amber glow. Norman was one of the first new-wave London restaurateurs to harness the bulb’s power as an aid to atmosphere. Aubergine-like in shape, it often culminates in a dimple where the hand-blown glass meets. “Its filament is like a worm,” says Norman. “It’s metres long, if you were to uncoil it.” Although he has never known a bulb to “spontaneously go” in function or by theft, Norman notes an interesting phenomenon can occur. “If it’s knocked, the filaments touch and fuse, so there’s less length to travel and a brighter burn. You could have two in a row – one of which is burning at twice the brightness.”

“Restaurateur, Keith McNally’s got it right,” appraises Norman. “He uses fluorescent tubes with a golden-Champagne hue. It’s like everything is reflected in gold.”

Norman discovered his first Edison-type bulb while rummaging through stock at the enchanting Canal Street Lighting and Parts store, New York. “It’s on the fringes of New York’s China Town, 100 metres from the Soho Grand.” However, on account of Europe’s higher voltage current, he needed to continue his search for a version that would work free from cumbersome transformers back in Britain. “I spent hours on the Internet – it’s hard if you don’t know the magic search words.” Eventually, in summer 2009, Norman located a distributor in Holland that produced the bulb in a 240 volt version. The cost per bulb: £18.

From where did Norman’s love of lighting stem? “For a lot of people, a light is something you switch on or off. But I’ve always been interested in lighting – particularly in restaurants. A restaurant has a duty to transport the guest, not only by way of food and service, but by its special ambience.” Norman takes a textured approach. “You don’t need a massive amount of expertise – tea light candles give pin points of lumière, for example, and can be the brightest thing in the room. Their gentle twinkle is something magical; great if on a date.”

It is time to head to another of Norman’s restaurants – Polpo in Covent Garden. But, re-donning the Crombie, he spots a dark Anglepoise crowing above the bar. His brow furrows. “Do you know where the isolator is?” he asks the barman, who knows better than to dither over the spent bulb. We pass Café Rouge en-route, which is undergoing hopeful renovations, perhaps to compete with posh counterpart – the new migrant, Balthazar. “Restaurateur, Keith McNally’s got it right,” appraises Norman. “He uses fluorescent tubes with a golden-Champagne hue. It’s like everything is reflected in gold.”

Inevitably, there is also a Nando’s on our short walk, complete with squirrel cage light-bulbs, burning rather brightly “Are you familiar with the lighting department in John Lewis?” asks Norman. He seems utterly unsurprised, but empathetic when I tell him that I once – unsuccessfully – applied to work in exactly that department in Milton Keynes during a lean stretch. “When the Polpo book was voted Waterstones Book of The Year, all I could think of saying to MD, James Daunt at the ceremony was how I’d been refused a job at Waterstones as a youth. Anyway, I found it appalling that the squirrel cage bulb has become so safe and suburban as to be available in the paragon of Middle England.”

Later that afternoon, I re-familiarise myself with the lighting department of John Lewis, Bond Street. The classic squirrel cage filament bulbs are indeed available for £15 (“for decorative effect only”). But what strikes me is their Cavendish Square-facing window. A chandelier has been fashioned from three-watt energy A-rated squirrel cage LED bulbs. “An LED squirrel cage bulb??!” responds Norman via Twitter. “I’ve now seen it all. But technology has to somehow be able to replace anything.”

Is Norman concerned that an EU ban enforced from September 2009 against sales of energy wasteful opaque filament bulbs might be extended to the non-LED clear squirrel cage bulb? Despite their catchy aesthetic appeal, they are rated “G” on the government’s energy index (the least efficient category). This is because only 10% of their power is rendered as lighting, the rest being given off as heat. “But we burn our 40-watt bulbs at 25%, equating to only 10-watts per bulb,” he reasons. Does Norman ever grow frustrated that his relatively early, recherché role in the resurgence of the squirrel cage bulb has been much mimicked? “It hurts when ideas are lifted wholesale, but you keep moving forward,” he says, smoothing temples. He adds, almost as a disclaimer: “I suppose there’s no such thing as an original idea.” However, Norman is himself is an arch-purloiner. One way “forward” against staleness of style was to drape Venetian-style lace napkins over the bulbs hovering the bar counters at the Polpo. Like the bespoke net curtains half-creeping their windows, Norman appointed his personal alterations tailor located on Lexington Street for the job. Of the latter, Norman explains that embroidering within lace is known as “faggoting” – a genuine Victorian technique. “Unfortunately, an overzealous dry cleaner f––ked them up,” he says. Also, the red globe above the door inside Spuntino references a near identical one at Moon River Grill in Sleepy Hollow. “I painted it with a brush, using insulator tape to mask EXIT.” In the same venue, Norman subdued the gleam of the popcorn maker.

We arrive at Polpo where tea lights gently flicker below an antique chart of the islands of Venice. At close range, Norman examines a P64 squirrel cage bulb at the end of a rope flex, his eyes perky. Soon he is at the controls of the room’s dimmers. “It’s got to be used by careful hands,” he says, with mock caution. At maximum brightness, it is hard to observe the delicate, highly-strung strands threaded between frames, without wincing. But at the minimum setting, filaments resemble the just escalating elements of a toaster, Norman is mindful that more mature customers may not be able to read the menu at this setting. That would not be a concern at Spuntino, whereby a truncheon-like “torch of shame” is administered to customers who dare to complain of its particularly muted lighting. But Theatreland’s clientele can be less easily amused. “There’s a fine line between finding the right setting and it being too dark,” he acknowledges. “I’ve walked into my restaurants when the lighting has been too low and virtually had to feel the face of who’s managing that evening!”

Norman will shortly oversee the installation of a neon sign headlining his Campari Bar under Polpo, Soho – quite different to when it was Canaletto’s house, but, arguably, no less artistic. “I wrote the text out about 400 times until I was happy with it,” he recalls. This echoes the “Negroni Bar” sign for Polpo Smithfield commissioned from artist, Kerry Ryan, Tracey Emin’s personal neon-maker for 17-years. His work also appears at nearby restaurant, HIX Oyster & Chop House.

“I’ve walked into my restaurants when the lighting has been too low and virtually had to feel the face of who’s managing that evening!”

Norman’s next major restaurant project, due to open towards the end of the summer, will be determinedly less edgy. “All my restaurants to date have been about stripping down decor and being raw. This will be about comfort and tradition. You probably won’t see a bare light bulb in favour of shades.” Running to 5,000 square feet, the site takes in the old Marquis of Granby pub and building beyond, off Cambridge Circus. “It’s our first ‘pub’. We’ll be serving interesting but comforting food. It will be a pub for people who don’t like pubs.”

I wonder, though, whether Norman’s Murano chandelier, which he mentioned earlier to me, will be a feature? Apparently it runs across eight boxes. “10 years-ago I received it instead of a fee for some consulting I did for a Russian restaurant group. But I’ve never had sufficient ceiling height for it.”

In our couple of hours together, Norman has talked about vintage bulbs, Champagne-hued fluorescent tubes, prime, directional neon and cut crystal. Never again will I be able to glance at – or around – the cutlery in hand without thinking of the particulars, the history and the thinking behind the light which elementally bathes it. C