Sometimes I long for the predictability of a Hilton, or that “Haven’t I seen this somewhere before?” feeling elicited by yet another Starck-designed hotel. One of those times was when I was waylaid, alone and emaciated, in a mosquito-infested Kolkata hostel, poleaxed by a particularly extreme and explosive bout of food poisoning. There are other times, when I’m in good health, sound mind and adventurous spirit, and willing to take a punt on something unique and unknown. Something like the Madonna Inn in San Luis Obispo.

San Luis Obispo is a pleasant but nondescript Californian town, halfway between San Francisco and Los Angeles. It’s long been a pitstop for weary intercity travellers and for couples conducting a long-distance relationship between the two cities. About 50 years ago, Mr and Mrs Madonna decided to set up the Madonna Inn hotel there. He drew from his career in construction, she from her work as an interior designer; untrammelled by corporate influence or interference, they created a landmark that’s known the world over.

The Caveman Suite is an actual cavern, carved from rock and bedecked in leopard print; the Carin suite is a camp, curved room decorated entirely in neon pink, a shimmering headache of sequined walls and artificial roses

The Madonna Inn contains 110 rooms but it’s perhaps better to imagine them as individual habitats. Decorated with unfettered fancy, each one follows a different theme with descriptive names on the doors giving only the faintest indication of what’s in store. The Caveman Suite is an actual cavern, carved from rock and bedecked in leopard print; the Carin suite is a camp, curved room decorated entirely in neon pink, a shimmering headache of sequined walls and artificial roses. I stayed in The Traveler’s Suite and was made Lilliputian by immense, oversized furniture and masses of floor space. Our harem-sized bed was so elevated that we had to hoist ourselves onto it, and so generously proportioned that we didn’t want to dwell too much on why another equally gargantuan bed was placed directly in front of it. The kitsch cherubs that glinted from the ceiling and gleamed from our bedside porcelain lamps both provided a distraction and compounded our suspicions.

The rooms are so bizarre that they form the focus of most guests’ experience at the property – many visitors request a different one on each visit; a savvy way of securing repeat custom – but the Madonnas have also taken steps to draw customers into common areas, all of which are equally unabashed.

The walls and floors of Alex Madonna’s Gold Rush Steak House are decorated in lurid shades of pink and crimson. Its curved banquettes are draped in squeaky pink plastic and drinks are served in chunky, multicoloured goblets that match the carpets. You come here for the experience rather than the cuisine, which is just as well. The food isn’t good. After perusing a dated surf ‘n’ turf menu, we ate bloated, soggy lobster, bland steak and wilted salad. It didn’t really matter – as we dined we were able to watch elderly local couples expertly cha-cha-cha and samba across the dance floor. They’d obviously been coming for years and their precision left a far greater impression than another agreeable meal in another homogenous dining room would have done.

From there, it was an inevitability that we would pick up some chintz from the gift shop and, as a concession to California’s fitness obsession and a salute to its climate, flounce around in the outdoor rooftop pool. The replica goblets and assorted bits of tat I picked up in the My Favourite Things Boutique look hideous now that they’re showcased in a nondescript London flat, but that just goes to show how impressive and effective the Madonnas’ all-or-nothing approach to interior design is. 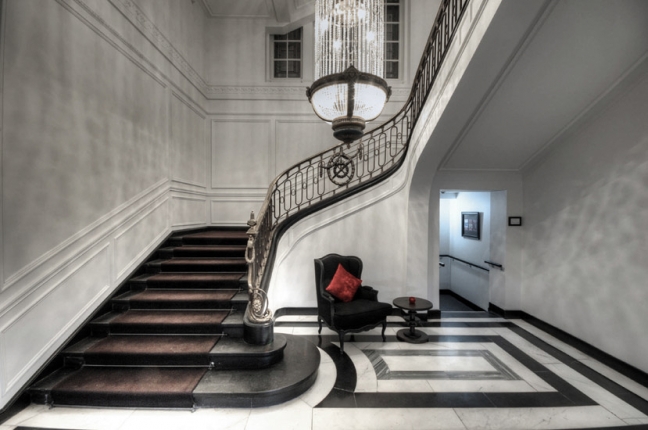